A World Heritage Site is a place (such as a forest, mountain, lake, island, desert, monument, building, complex, or city) that is listed by the United Nations Educational, Scientific and Cultural Organization (UNESCO) as of special cultural or physical significance. We have nine such sites in the Netherlands. You can see five of them on this tour: The canal district in Amsterdam, The Beemster polder, Wouda steam-driven pumping station, Schokland and surroundings and The Defence Line of Amsterdam. What else can you look forward to on this tour? To name but a few highlights: delicious Beemster cheese, the pretty town of Edam, the cheese market in Alkmaar, medieval Muiden Castle, quaint fishing villages, a star-shaped fortified town, polders old and new, a boat trip across IJsselmeer and diverse and charming scenery all the way. 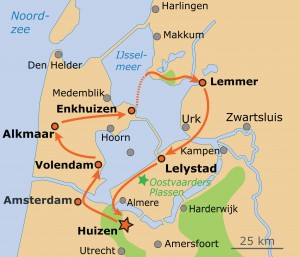 Daily from May 1 till September 22

In case of staying overnight in Amsterdam on Saturdays a surcharge applies of € 20,- per person in a single or double room.

Practical information: ♦ 8 nights Accommodation in *** or **** hotels ♦ Breakfast (buffet) ♦ If you book Half Board: each night an evening meal  ♦ Parking, free at the Hotel ♦ Detailed route description and maps  ♦ Tourist information on all the places of interest ♦ Saddlebags for carrying things you need on the road when having rental bikes ♦ Seven days a week service-hotline ♦ The possibility of renting our bikes and trailers (at extra costs) ♦ Closest Trainstation, Weesp Included: ♦ Accommodation at double room  ♦ Breakfast (buffet) ♦ Tourist tax
♦ Tourist information on all the places of interest ♦ Detailed route description and maps  Not included: ♦ Journey to the starting point of your cycle holiday. ♦ Journey from the finishing point of your cycling holiday back home ♦ Cost of rental bikes and trailers ♦ If you book Half Board: Drinks with your evening meal. ♦ Lunch

This 4-star hotel is located in a historical building, in the heart of Alkmaar, where it provides tasteful design rooms with free Wi-Fi internet. The Grand Hote... Read more

Hotel Lemmer is located on the edge of the centre of Lemmer and offers a garden with terrace. IJsselmeer is only a 5-minute walk away. This hotel consists of 2 ... Read more